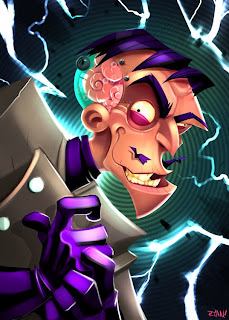 I, Professor Laser, have taken a minute to share with you my secret to success. I expect you all to be super-impressed by what I have to say. If you find yourself to be too amazed, simply take a moment to think about something comforting, like a Twinkie or a Two and a Half Men marathon.

Let's cut right to it: Dedication... correction, unyielding dedication, is the secret to success here at Big Menace Industries. I represent the pinnacle of dedication as can clearly be seen in my augmentations. What may appear to you as a fishbowl filled with cotton candy is actually an incredibly advanced improvement to human anatomy. After mounds of exhaustive studies to improve the way the mind absorbs and retains information and after many, many casualties I was at a dead end. It became clear that the problem with my experiments wasn't the experiment itself so much as the subject. After I created a brief set of "In Case of Catastrophic Results" instructions for my Human/Crab/Robot hybrid assistant, I began the procedure. Now, I possess a brain capable of driectly downloading information via something I call the "SmartPort". My assistant calls it the "Brain Nipple" but that's because he's an idiot. Because of my dedication to the cause most of you, the employees here at Big Menace, will be outfitted with such a device so that you may learn your mundane skills faster.*

This ends the transmission.